Umpire Interaction: Procedures and Conduct Regarding Game Situations For Coaches 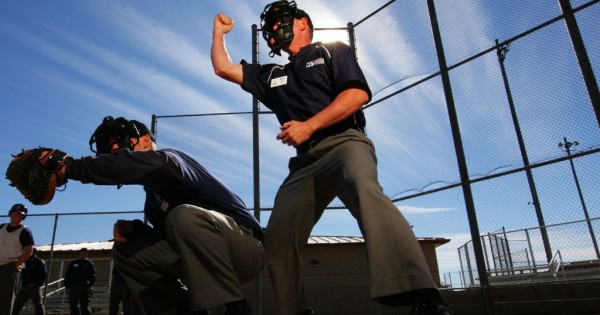 This page has been created to assist new and current High School Baseball coaches. The purpose of this page is to help coaches understand how to interact with umpires during a game. By following the guidelines on this page hopefully coaches and umpires will be able to communicate better with one another thus creating a better environment for everyone. The major issues covered on this page are presented by Dave Nixon, an umpire with the Lake County Athletic Officials Association, and Bryant Tutterow, webmaster of the Indiana High School Baseball Coaches Association. The issues discussed are as follows:

The Proper Way to Ask About Balls and Strikes

For instance, a coach may (from the dugout) call “where was that pitch”. Many umpires have no problem answering ‘it was inside, coach’. However, other umpires will answer the coach’s same question by stating that “it was a ball”. Who is right in this situation? The answer is both. Most umpires prefer to answer the coaches question and tell them the location of the pitch. In reality, umpires are not required to explain the call….but only to make the call. Most umpires do have a problem with a coach asking the catcher, “Ron, where was that pitch” since this puts the youngster in a awkward situation, ESPECIALLY, if the coach has just asked the umpire where that specific pitch was thrown. Does the catcher say the pitch caught the corner thereby alienating his relationship with the umpire (who had called the pitch a “ball”) or does he react in a different manner (rolling his eyes, shaking his head in disbelief at the call, etc.). To be safe, the coach’s best bet is to communicate with the umpire and not damage the next point, The catcher’s relationship with the home plate umpire

The Catcher’s Relationship With the Home Plate Umpire

During the game, an umpire usually establishes a working relationship with the catcher. This relationship may be purely social such as, “have you had your prom yet?” or “are you a senior”, or “how’s your season going?” Other aspects of the catcher/umpire relationship may extend to the playing of the game. This could be “catcher, you’re blocking my vision when you quickly move inside for the pitch”, or “nice stop on the wild pitch”, or “I saw the pitch hit the dirt and that’s why you should’ve thrown to first” on the catch of a bounced third strike. The main reason why it is so important that a coach make sure that the catcher has a good relationship with the umpire is because the umpire will be more likely to answer your questions or give you a break if you happen to slip up and not follow the proper procedures in a different area as you will see in the next section, Timeouts (When can they and when should they be called).

Timeouts (When Can They and When Should They be Called)

Timeouts are pretty well-defined in the rule book. But many times a coach may hollar “time out” after his pitcher throws ball four. He must wait until the batter has reached first base. This is a small point but a good umpire will wait until the batter has reached first base before calling Time Out. However, the coach could be impatiently wondering why the umpire has not immediately called time out and he now has a bad taste in his mouth about the umpire. Another situation may be when a coach may leave the dugout to argue a call. In reality, the coach is required to call time out to enter the field but most umpires will not require that the coach “burn” one of his three time outs to discuss a call. Most don’t charge a Time Out………unless the coach has been giving them a great deal of grief beforehand.

The Proper Way to Make a Substitution

The situation may arise where a coach may enter a pinch runner (a substitute) and, during the annoucement to the ump, say “and I’ll reenter the starter”. No good! Especially if the team bats around in the same inning wherein the starter must reenter at the second instance. (If the substitute stays in to play during the protracted inning, he will be an illegal substitute). The correct method is for the coach to finish the inning and THEN announce the reentry of the starter for subsequent innings.

The Proper Way to Appeal a Call

Umpires feel the area of “Asking for Help” is the biggest issue they have with coaches. The proper procedure is for the contesting coach to appeal to the umpire making the call for help from his partner. THAT umpire then has the right to either accept or decline his request. If he accepts the call for help, he will go to his partner(s) and discuss the play. Some umpires have an attitude that they made the call and how could anybody possibly disagree with his call. More than likely, he would then decline the coach’s request for assistance. Many umpires do not have a problem going to their partner and asking him what he saw during the play (they feel that four eyes are better than two). But some umps DO have that problem of overturning their call — Most don’t. Umpires watch the “bigs” on TV and, unfortunately, MLB umpires do not ask for help between themselves….maybe they should………..since high school umps most likely try to emulate them. A good umpire should not be oppossed to hearing another umpires opinion on a play. During the umpire’s discussion of the appealed play, it is important for the coach to stay away (literally stay away) from the discussion and accept the final decision. In some situations umpires come together and appear to be discussing the play when, in actuality, the ump may say “where do you want to eat after the game”. He will then turn to the inquiring coach and tell him that the play was discussed and the play stands. A coach should never appeal a JUDGEMENT call unless he feels a ball was dropped (or caught) by a fielder or some other circumstance occurred that prevented the calling-umpire from seeing the total play. Check swings are certainly appealable but only if the field umpire is in the correct viewing position to make an intelligent call. Whether a pitch is swung at or not is a judgement call. Some people believe that “breaking the wrists” and “the bat went past the plate” will automatically define a strike. They do not. Umpires use those actions as factors, but factor are all they are. It is purely a judgement decision. Whatever the situation, it is obvious a coach will probably not be pleased with every decision made but the important thing to remember is that once the umpire has asked for help, then that call will stand and nothing the coach says will overturn the call.

Spectator control is an area that is important. A coach has much more influence over his schools’ fans than the umpire. Normally if a coach asks fans to quiet down they usually do. By doing so, the coach will definitely improve the relationship with the umpire. As indifferent as an umpire should be about the outcome of a game, there could be a call made that may be influenced by the conduct of the spectators.

This article is here to help coaches understand the proper procedures to follow during a game. Hopefully this has been interesting for you. Coaches please email me, the IHSBCA Webmaster, with any issues you feel would help umpires be able to understand what will make them a better umpire.